Inside Track with Declan McDonogh 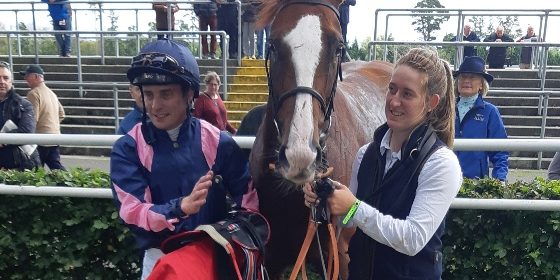 We caught up with top Irish jockey Declan McDonogh for a quick chat about life during the Covid19 lockdown, racing overseas, Netflix, his Gowran Park highlights and much more.

Lives: From Meath but living in Kildare since 2002 with his wife Eimear and daughter Poppy.

Earliest memory of horses: I was surrounded by them at home we had ponies and loved riding them. We went racing as kids and I have a vague recollection of going to the Irish Guineas in the mid 80’s. As a child one of the first horses to catch imagination was Nashwan who won the 2,000 Guineas & Epsom Derby in 1989 and was ridden by Willie Carson.

First job in racing: I was apprentice with my Dad but I rode out for Dermot Weld. My sister Shona had to drive me down as I was too young to drive and she was riding work as well at the time at Dermot Weld’s and raced for him a number of times.

First winner & where: Aine’s Pet Leopardstown 6th June 1995 trained by my Dad Des McDonogh. It was a special day and I started my Junior Cert the following day. I was on a high so not easy to concentrate on exams.

Favourite horse: I’d have to say Rebelline trained by Kevin Prendergast. I had some good wins on her and they really kick started my career especially with my first Group 1 in the Tattersalls Gold Cup at the Curragh in May 2002.

The race win:  Qatar Prix De L’Abbaye in Longchamp on Maarek on Prix De L’Arc Day in October 2013. Longchamp is a special track and to have a winner on that day was extra special.

Best racing advice to young jockey’s: You need great dedication to the job it is so important especially nowadays with so many distractions.

If you were not a jockey what would you do: I always had a fascination for aviation so maybe something in that field.

Sporting idols when you were young: When I was young Meath footballers were having great success so David Beggy and Colm O’Rourke were players I idolised. I remember them coming to school with the Sam Maguire and there was great excitement.

The Musician/Band: The National, War on Drugs & Sam Fender

What is your Gowran Park stand out memory:

Gowran Park is a very lucky track for me. I’ve recorded a few trebles there and I have won most of the listed races. I was very happy to win in the Group 3 Denny Cordell Laverack & Lanwades Stud Fillies Stakes on Four White Socks in 2019, she bolted in.

You were Irish champion jockey in 2006 and beating some of best jockey’s in the world – Kinane, Murtagh, Pat Smullen. Tell us about that year.

It was just one of those years everything went right, horses that we may not have expected to win, won. The trainers and owners had phenomenal years themselves. It’s a lovely memory and one I would love to have again.

You have spent some winters abroad any fond memories or places you would return.

I spent 2 winters in Japan and that was a great experience. The jockeys there are like stars. I recall receiving fan mail complete with stamped addressed envelopes. Singapore was good as well.

Of all the places, I really enjoyed Sydney, I was there for the winter of 2017/18. Randwick was the main track at the weekends in Sydney. During the week we had Gosford and Canterbury on a Friday night under the lights. The racing was great, it took time to acclimatise to the heat especially the tracks that were more inland. Randwick was closer to the coast which tended to be a little cooler.

Pressed on whether he would travel again?

Travelling is great you learn so much about horseracing. You never say never. I’ve a little daughter and it would be nice to show her the various places where I lived and worked. Japan gets quiet cold. Sydney would be my first choice, the racing is great and the lifestyle is ideal we lived in Coogee near the beach which is gorgeous and a great place to relax when not working.

You already had a Listed win this season at Naas in the Devoy Stakes.

Yes, Numerian is trained by Joseph O’Brien it was a great start and delighted with that and to beat a horse of the stature of Sir Dragonet is great for all the connections.

You are obviously riding out during the lockdown? What other things are you doing to pass the time?

I certainly miss race riding but I’m down in Joseph O’Brien’s three times a week. It’s a little different as everyone is taking precautions wearing gloves, using sanitizer and keeping their distance. At home we are busy with our daughter Poppy who is 11 months old and a real bundle of energy she keeps us on our toes.

On days I am riding out I am up at 5.20 and in yard for 7 o’clock every Tuesday, Thursday and Friday. Some days Joseph’s brings horses to the Curragh to gallop. Poppy is awake at 6.30 so there is no lie in any morning.

Most of the country are eating out of boredom during the lockdown do you find it harder to control your own eating during this time:

There has been no change to our eating habits really, we eat pretty well. My wife is a good cook. We don’t eat much rubbish. We tend to eat breakfast, lunch and dinner. In the evenings we try eat early rather than late.

Do you have a Strength & Conditioning training programme

Yes I was one of the first to train with Wayne Midleton who is on the jockey pathway now. He is my strength & conditioning coach. I’ve been training with him for 2 and a half years. He has done a programme for me during the lockdown and we can do a Skype workout as well at a time that suits. The programme features a lot of resistance band work and weights and some cardio. We try to mix it up. I did some pilates when I had soreness in my back.

Joseph O’Brien nominated you for the raw egg challenge……how did it compare to the ice bucket challenge.

I did the raw egg challenge and put it on my Instagram story. Lets just say I won’t be adding it as part of my daily diet. I nominated a few of the lads that work with in Joseph’s. The ice bucket challenge is going back a bit but I do remember doing that with Kevin Manning after we got out of a sauna so it was not so bad.

Are there any particular horses that excite you for 2020 –

On a broader scale Pinatubo stands above a lot of horses, it will be exciting to see how he stands up as a three year old, he was pretty awesome last year. Closer to home Buckhurst looks a lovely older type horse and did nothing wrong last year.